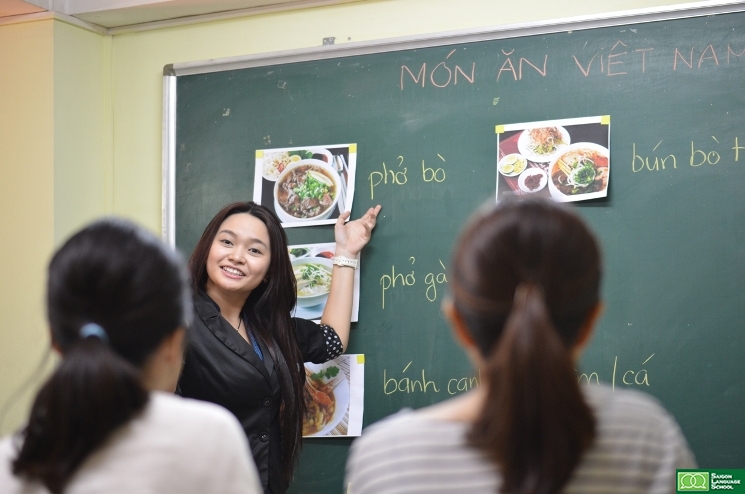 Vietnamese language is much simpler than English language in all aspects: pronunciation, grammar and vocabulary. Learning it is quite easy for English speakers.

1- It’s a monosyllable language: every word has only one sound (one syllable).

While many nouns comprise of two words, each word has only one syllable.

There is a strict rule for pronunciation. One vowel or one vowel combination has only one way of pronunciation, no exception.

Which means the vowel A always sounds /a:/ in any word that contains vowel A.
For the vowel combinations, it’s simply two separated vowels being pronounced linking each other to produce a mixed syllable.

Vietnamese language doesn’t have homonyms, because there is no two different words with the same sound. With one syllable you can only have one way of writing and almost every word has one correct spelling only.

3- The ending consonant is never pronounced.

4- Because all the words are monosyllable, there is no stressed syllable like English.

5- There is no intonation in a sentence.

Every word is pronounced with the same pitch, same volume. We can say that Vietnamese speech is monotone and flat. You can imagine a line of soldiers with the same height and the same weight.

Again, imagine a line of soldiers who are not only with the same height and same weight but also march in the same speed and same movement.

7- However, Vietnamese is a tonal language, because it has 5 main tone marks (dấu):

The tone marks not only change the tone but also give the word a different meaning. The words with the same spelling but different tone marks are not related. They are not the words in a family.

Thus, Ma, Mà, Má, Mả, Mã, Mạ have different tones, different meanings and are not related to each other.

8- There are 3 more vowel-specific tone marks:

• Upperright-Attached Hook : like in Ơm. This tone mark goes with O only.

Recognizing the differences in 8 tone marks and how to mimic the tones are the biggest challenge in speaking Vietnamese for non-native speakers. So far there are no International Phonetic Symbols to express these tone marks, so learners have to listen to native speakers to recognize them.

9- Also, there are some Vietnamese sounds that are non-existent in English pronunciation:

1- Verb tenses: Only one present tense, only one past tense and only one future tense.

Vietnamese are not so sensitive, so conscious about the time when the action happens like English language. So they use Tense Markers before the verb but keep the verb in base form.

In fact, the second sentence is more popular; because there is adverb of time Năm Rồi (last year) so Vietnamese don’t bother adding Đã before the verb Đi Chơi (visit). Using Đã too often causes the speaker sound unnatural, unnative.

3- The verb To Be (thì, là) is usually omitted if it follows by an adjective:
For example: Cô ấy đẹp (She beautiful) but Cô ấy là một học sinh (She is a student).

4- Because Vietnamese verbs are not inflected, so there are no auxiliary verbs like English.

5- No change from singular noun to plural noun, but plural indicator Những or Các may be added before the noun.
For example: Một cái ghế - Hai cái ghế (One chair-Two chair)
Một cái ghế - Những cái ghế (A chair-Some chair)

6- While Possession in English is formed by Of or ‘S, Vietnamese has Of only (Của).

Ex: Cái nón của ông ấy (the hat of him). It can even be omitted. Ex: Cái nón ông ấy (The hat him). There are no Possessive Pronouns (his, hers, theirs, ours) in Vietnamese.

7- Vietnamese Comparative and Superlative of adjectives are simpler than those of English.

There is no difference between long or short adjectives.

8- Normally, the adjective is after the noun.

Except when the two-word noun is a Chinese-Vietnamese term, then the adjective is before the noun. Ex: Siêu thị (supermarket), because Siêu (super) and Thị (market) are both Chinese Vietnamese terms.

However, there are two complex issues in Vietnamese grammar:

9- The way Vietnamese address (call) each other can be very complex to non-native speakers.

While for English speakers, “you” is a catch-all pronoun to the person you are talking to, Vietnamese language has a dozen of you-pronouns, depending on the gender and age of the person the speaker is talking to. In original sense, they are kinship terms, but Vietnamese use them for both relatives and non-relatives. This addressing rule is age-based and gender-based, as Vietnamese culture is Confucius-influenced, which expects one to respect those who are older. But this is also an indication that Vietnamese people are friendly to each other and to tourists, as if they are supposed to treat everybody like relatives.

To make it even more complex, if the person they are talking to is at the same age, Vietnamese can also call Ông (male you), Bà (female you), Mày (very friendly you), Bạn, Bồ (friend) or Cậu (buddy).

Vice versa, the way the speaker addresses the person they are talking to determines the way they call themselves. There is no generic, universal You like English.

If the speaker addresses the person they are talking to as Anh or Chị then they call themselves Em.

If the speaker addresses the person they are talking to as Mày then they call themselves Tao.

Tôi, Tớ, Mình is the terms one calls himself/herself when they speak to those with the same age.

10- The classifiers or “special articles” before Vietnamese nouns are a challenge to Vietnamese language learners.

While English has only 3 articles: A, An and The, Vietnamese language is full of those classifiers. Classifiers are used to give objects an attribute such as shape or animacy and untranslatable into English. So many examples below:

While Con is usually used for animals like Con Chó (dog) Con Mèo (cat) etc. and Cái is usually used for objects like Cái Ghế (chair), Cái Bàn (table), it’s an exception for Con Dao (con knife) but not Cái Dao (cái knife). Asking them why is the same as asking English speakers why Weight is pronounced /weit/ but Height is pronounced /hait/. So just learn by rote and use them.

- Vietnamese vocabulary is about 1/25 of English vocabulary, which means less than 40,000 single terms. About 70% of them have Chinese language’s origin.
- The longest Vietnamese word has only 7 characters: Nghiêng, so spelling Vietnamese should be very easy compared to English. Absolutely no spelling competition, regional or national.
- Due to a limited vocabulary, Vietnamese language has to use many original English terms as they have no Vietnamese equivalents.

To sum it up, Vietnamese language is not without challenges to Westerners, but in general, thanks to its use of Roman alphabets and its simplicity in grammar and spelling, it’s fairly easy to learn.

Joomla Hosting and Maintenance by Cybersalt